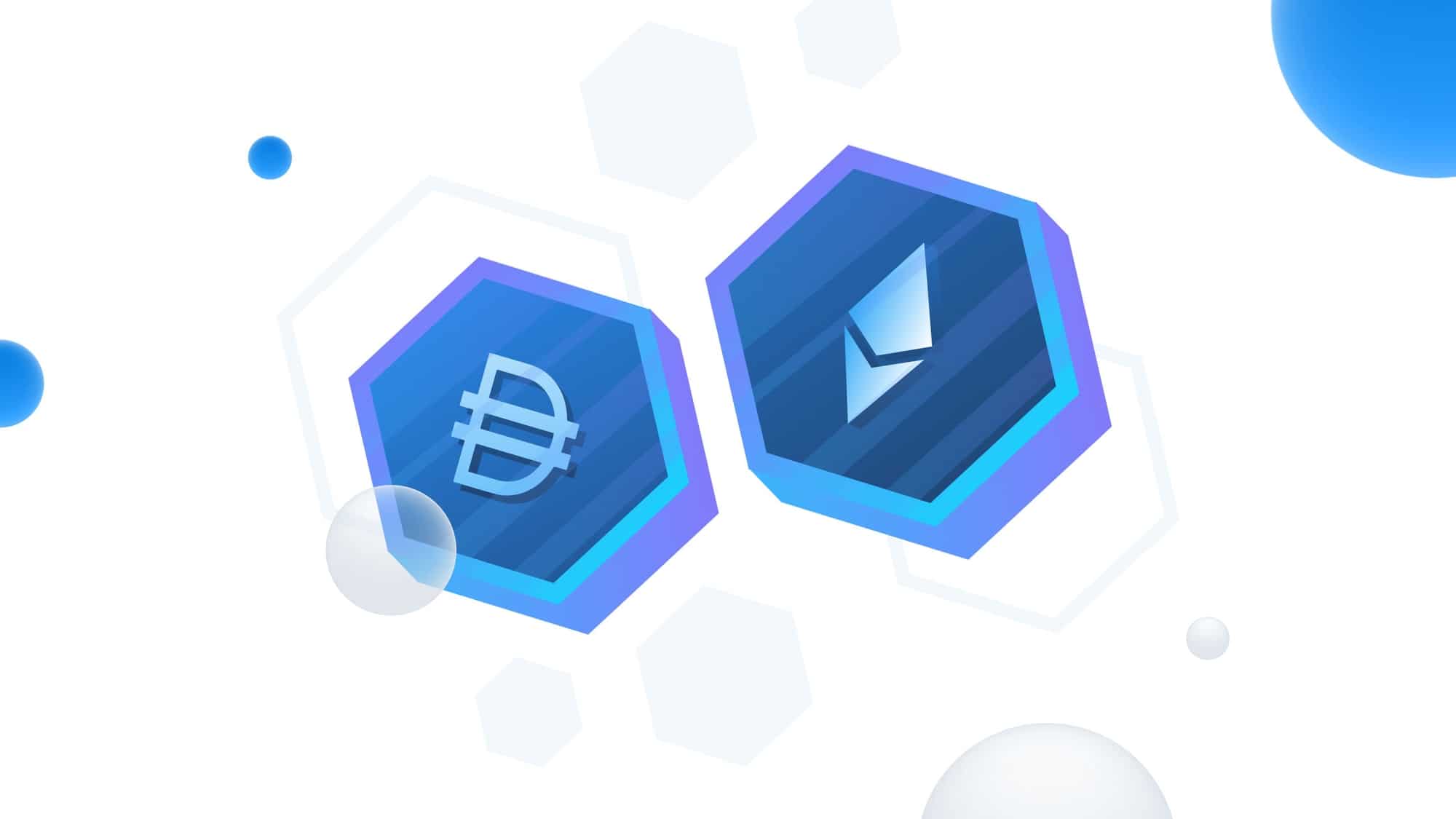 The birth of Bitcoin (BTC) over a decade ago has opened doors to many other cryptocurrencies. Although it still reigns as the most popular and largest cryptocurrency by market capitalization, Ethereum is trailing behind steadily while Dai is also rising in popularity. In this simple guide to Ethereum and Dai, we’ll take a closer look to understand both cryptocurrencies better.

Currently, Ethereum is the second most popular cryptocurrency. Despite the exciting growth of cryptocurrencies, they’re highly volatile, and the price can fluctuate wildly. The unpredictability of cryptocurrencies prevented them from being adopted widely as a reliable currency that people can use daily.

What is Ethereum (ETH)?

Launched in 2015, Ethereum is a decentralized software platform used for Ether, its cryptocurrency. The blockchain-based platform allows smart contracts and distributed applications to be built and run without downtime or control from a third party.

As a decentralized system, it is not controlled by any governing entity. Without any central point of failure, Ethereum is autonomous and run by volunteer computers worldwide, which will never go offline. For Ethereum to run, it needs a currency to pay for the computational resources running the program. That’s where Ether comes into the picture.

Ether is the digital bearer asset that operates as a currency and as sustenance for the decentralized apps within the Ethereum network. Compared to Bitcoin with a hard cap of 21 million, Ethereum has a potentially endless supply. Furthermore, Bitcoin’s average block mining time is 10 minutes, whereas Ethereum only takes about 12 seconds for confirmations.

Another good thing about Ethereum is that it uses proof-of-work algorithms and encourages decentralized mining by individuals instead of large-scale mining farms as such used by Bitcoin.

How does Ethereum Work?

Using the blockchain technology, Ethereum consists of secure public records linked together that are difficult to modify. The reason is that these records are stamped with user data, time and date, and changes that must be approved by all parties. Ethereum is trustless, meaning that anyone can create a financial contract or ownership registries and keep debt without a trust officer’s need. This is perhaps the most significant advantage of Ethereum. It’s utterly immune to third party interventions and can’t be controlled by anyone. Besides, the decentralized nature of the Ethereum network makes it well protected against hacking and fraud.

Since smart contracts are essentially a set of codes written by people, there’s always room for human error. When mistakes happen, it’s easy for the network to be exploited. For example, in April 2016, 3.5 million ether was stolen by a hacker who used a “recursive call bug” that resulted in Ether’s value falling from over $20 to under $13.

You can buy and sell ETH in exchanges such as Coinbase, Gemini, or Kraken. To gain yield from your Ethereum, you can hodl it in crypto lending platforms such as Hodlnaut, giving you 6.7% APY (annual percentage yield).

Dai is an ERC-20 token, a stablecoin created by Maker DAO, a smart contract platform that controls and sells the cryptocurrency. Similar to Ethereum, Dai is trustless and decentralized while being pegged to the US dollar. The value of 1 Dai will always be approximately $1 USD.

And since it’s built on the Ethereum network and backed by Ether, it’s completely decentralized because it relies on a set of smart contracts which does not rely on banks or centralized third party. Furthermore, Dai is suitable for payments, savings, or collateral because of its stable nature and can be easily transferred within the Ethereum wallets.

Dai is the product of MakerDAO, which was founded in 2017 on the Maker Protocol by Rune Christensen, who’s also the current CEO.

How does Dai Work?

Dai is key to MakerDAO’s lending system. When a loan is taken out on MakerDAO, a Dai is created and automatically becomes the currency that users use to borrow and pay. To maintain price stability, Dai is managed through a system of lending in the Ethereum network. For a Dai to be created, a user with Ether would deposit their asset into some kind of vault that’s called “collateralized debt position.” As a result of depositing ether as collateral, Dai is generated into the Ethereum network.

The mechanism of how Dai is generated is unique. When Dai holders unlocked their ETH, they pay back Dai and a stability fee, which will be increased if Dai’s value drops below $1. This results in Dai loans being more expensive, which leads to fewer loans and retracting the supply, driving up the price. Consequently, if Dai values more than $1, the stability fee will be lowered to make the loans cheaper, resulting in increased supply and lower market prices.

As of now, Dai has remained stable for two years, with no significant price fluctuations from its $1 price peg. You can buy Dai at centralized exchanges like Kraken, Coinbase, and Bitfinex. Furthermore, to grow your Dai assets, you can hodl with us and earn 12.73% APY.

Bitcoin is not the only cryptocurrency worth investing in. The emergence of other cryptos and stablecoins have proven that things will only keep evolving in the cryptocurrency world. Ethereum and Dai are two of the most popular cryptocurrencies that embody the decentralized and trustless principles that fiat currencies lack.

We hope you find this guide to Ethereum and Dai helpful. In case you don’t know, Hodlnaut recently added Ethereum and Dai to the platform. Now, all users can hodl these two assets while enjoying attractive returns with no minimum deposits or lock-in periods.