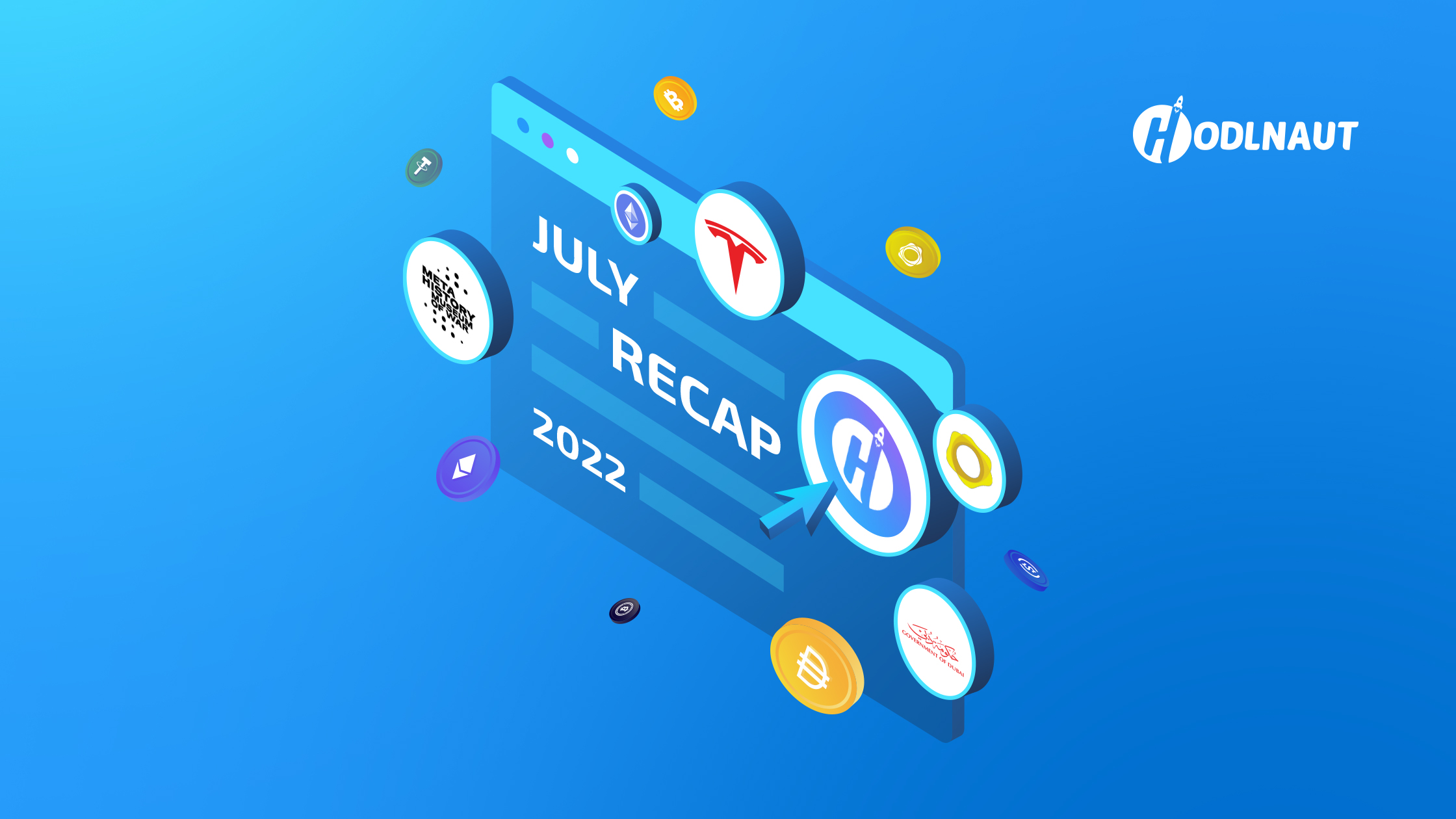 Welcome to Hodlnaut's monthly news recap, where we summarise the monthly happenings at Hodlnaut and the crypto space!

July has been an exciting month for Hodlnaut, with a new asset listing (PAX Gold) and a new feature (free internal transfers). Read on to learn about the latest advancements in Ethereum and NFT sales supporting the Ukrainian war effort.

PAX Gold (PAXG) is the latest addition to Hodlnaut's network of depositable assets. PAXG, a cryptocurrency that is backed 1:1 to the value of gold, was made available to Hodlnaut users from July 8 2022, allowing users to earn 1.00% APY in interest. Furthermore, Hodlnaut announced a launch promotion, where any swap into PAXG until August 8 2022, would yield a 0.5% bonus paid in PAXG.

1. Tesla Shed 75% of its Bitcoin Portfolio

After a challenging second quarter, denoted by the slowing and halting of vehicle production, Tesla has sold 75% of its Bitcoin holdings, valued at approximately USD 936 million. Tesla CEO, Elon Musk, announced that the mass sale of Bitcoin isn't to do with the assets downturn but a move to increase the company's liquidity. Musk also stated, "We (Tesla) are certainly open to increasing our Bitcoin holdings in the future".

One of the lead developers on Ethereum's 'The Merge' has announced a prospective launch date. Tim Beiko, a core developer at Ethereum, told a conference call the substantial network transition could come into effect on September 19 2022. The Merge will see Ethereum Magnet and Beacon Chain consolidate, overseeing a shift for the network from a proof of work mining system to proof of stake. The move will permit further scaling opportunities for Ethereum, including sharding, plus reduce the network's energy emissions by 99.95%.

The Crown Prince of Dubai, Sheikh Hammad bin Mohammed Al Maktoum has announced the launch of the Dubai Metaverse Strategy, aiming to make the Emirate a global tech capital by 2030. The project will create 40,000 jobs based on artificial intelligence and Web3, impacting Dubai's tourism, education, healthcare, retail, remote work, and legal sectors.

The Government of Ukraine will utilise the proceeds of NFT sales to help fund the restoration of real-world art. The Meta History Museum of War, a Ukrainian-backed initiative, have created NFT artworks timelining significant events during Russia's invasion of Ukraine, raising 804.18 ETH (USD 1.1 million).

Businesses in Gibraltar have adopted Bitcoin as a method of payment, including the world-renowned coffee brand Costa Coffee. Payments via Bitcoin’s Lightning Network have opened up new financial possibilities for companies in Gibraltar, with Hotel Chocolat, Card Factory, and Gibraltar Bakery following Costa’s lead. This news comes as a timely boost for Bitcoin after a turbulent 2022.